ALBUQUERQUE, N.M. — The Albuquerque City Council has a packed agenda for their meeting on Monday, Aug. 2.

The meeting was expected to be in person, but Albuquerque City Councilor Cynthia Borrego said after discussions with the state’s Department of Health and the mayor’s office, she decided council meetings will remain virtual due to the rising number of COVID-19 cases driven by the Delta variant.

"Well, I was looking forward to going back because I haven’t had an in-person meeting since I’ve been the council president," Borrego said.

The council has been meeting virtually since last March. 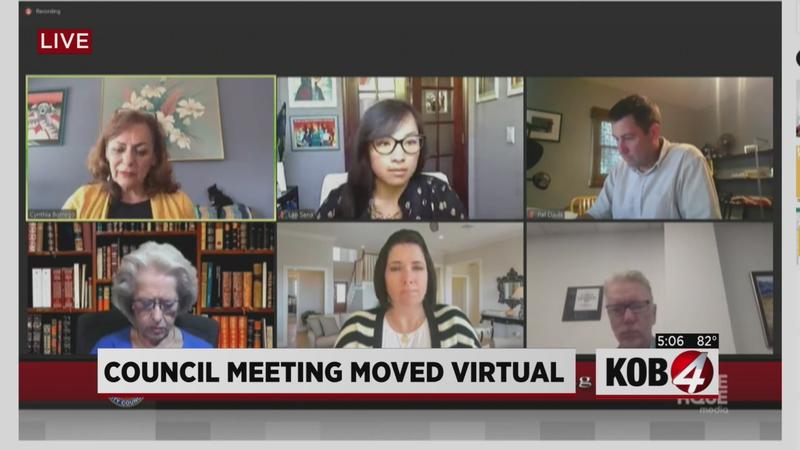 Councilors will be tuned in virtually as they are introduced to the resolution for a proposed New Mexico United stadium. The city council won’t vote on putting it on the ballot until their next meeting. If that happens, voters would have the final say on whether the city should put up $50 million to build a multi-use stadium for the team.

City Councilor Pat Davis told KOB 4 that if voters approve the plan, taxes will not go up and current programs won’t be cut.

The council is expected to vote to put the stadium on the ballot on Aug. 16.

Another resolution introduced Monday night aims to prevent deaths in Albuquerque arroyos. Four people have died in recent weeks after getting swept away in fast-moving water this monsoon season. The resolution calls for a study to identify areas with heavy foot traffic and to make suggestions on what can to be done to make arroyos safer.

At the meeting, there is expected to also be a vote to ensure there will be enough landing areas for balloonists in Albuquerque. The city is looking at the possibility of spending up to $70 million for a 91-acre lot near Osuna and Paseo del Norte.

Monday night could also mark the last stop before free fares on the Albuquerque buses get rolling. The mayor originally told KOB 4 that pilot program was expected to start last month. However, that didn’t happen. After some finger-pointing between the mayor’s office and the city council, there are three resolutions on the agenda to be voted on Monday.

This has the potential to be contentious – as they aim to clear up language in the original budget and transit ordinance. They will also set a new start date for Oct. 1.

To tune in to the city council meeting, click here to find the Zoom link.