ALBUQUERQUE, N.M. – Within two weeks, there have been deadly shootings at two Albuquerque businesses where employees were held at gunpoint during a robbery. Now, local police are working to determine if the person who shot and killed the suspects will face any time behind bars.

The latest case happened on Tuesday morning, when police say an armed man walked into the Subway on 1306 Gibson Blvd. S.E.

"It appears the male had entered the business and attempted to rob one of the employees,” said Gilbert Gallegos with the Albuquerque Police Department.

An employee at the Subway said the attempted robbery and that’s when they fired at the suspect and killed them.

Then last week on Monday, nearly the same situation happened at a local Tobacco shop. When an armed robbery suspect entered the store and was also killed by an armed employee.

Gallegos said having these two situations happen is such a short time frame is incredibly rare, "It is concerning that we hadn’t had, at least in a few years, an armed robbery at a restaurant or a business that turned into a homicide, and now we’ve had two in the last couple of weeks."

Investigators are working to determine if these shootings will be deemed justifiable homicides.

KOB 4 asked University of New Mexico Law Professor, Josh Kastenberg, for his legal perspective on these two cases. He said key details in both situations still need to be released before a determination can be made, but he spoke about some of the basic guidelines that police look into.

"There has to be a reasonable display of potential deadly force by the individual," he said.

Adding that for a shooting to be ruled justified, the suspect must show the weapon to the victim, or lead people to believe they have a deadly weapon.

He also said the person who shoots the suspect must be in fear for their life, which these two recent cases appear to show. However, there is one aspect where Kastenberg said it may not be.

"If a person comes into a store armed, then leaves, the store employee cannot chase them out into the street and shoot them,” Kastenberg said. “That homicide would not be justifiable." 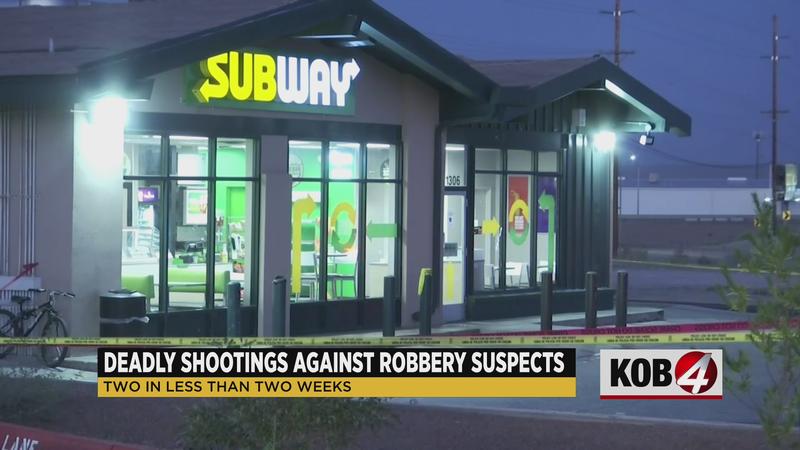