LAS VEGAS, N.M. — The Las Vegas Fire Department is mourning the loss of their former colleague, Frank Lovato, 62, who was identified as the driver killed in Wednesday’s crash on I-25 that also took the life of a Santa Fe police officer.

Lovato had been with the department for more than 20 years.

"He was very loved in this community," said Steven Spann, interim Las Vegas fire chief. "He was the example of a firefighter and the brotherhood that we have in the fire service. Everybody was his brother, everybody was his friend. The guys can’t keep saying enough about him this morning."

Spann said the 20 firefighters in the department are wearing black mourning bands on their badges to honor Lovato’s life and service to the community. Some of those firefighters had served alongside Lovato for years.

Lovato started his career as a volunteer firefighter and became a paid firefighter with the City of Las Vegas in 1983 at the age of 24. He retired, as an engineer, in 2006. 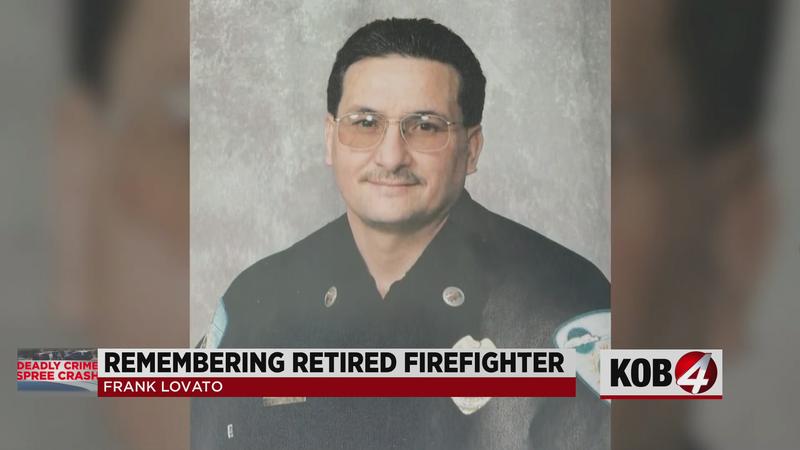 "He was a down to Earth people person, wanting to just help everybody he could," Spann said. "I’ve talked to the guys over the years that I’ve been here and even this morning and they told me he’s the kind of guy even after he retired he still wanted to help the community. He would come by and visit them and see how they’re doing, always have time for a cup of coffee."

Spann said Lovato’s family has asked for privacy as they mourn an unimaginable loss. Lovato leaves behind a wife, children and grandchildren.

"Of course, we visited with the family this morning and were there for them," Spann said. "So our priority is to take care of them at this time and then will take care of ourselves once they’re OK."

The fire department, along with multiple agencies across New Mexico, will be providing an escort procession from Albuquerque to Las Vegas for Lovato. Officials said they will date and time of the procession is still being determined.