ALBUQUERQUE, N.M. – It has gone from cold to frigid in the last few hours, and the roads have only gotten more dangerous. Across the metro and into the East Mountains, first responders have stayed busy with dozens of calls.

And this snow day has had a dark shadow over it because of the fatal rollover crash in the Sandias.

Ben Megah lives at the base of the Sandias, just a few miles from where a truck rolled more than 100 feet down the mountain Wednesday afternoon. The Bernalillo County Sheriff’s Office said one person died.

"It gets deadly. It gets real deadly. It happens every year somebody gets hurt. You know and that’s too bad, it just takes all the fun out of all this beauty. Because it’s tragic,” said Megah.

Drivers lost control all afternoon in the slick conditions across the metro. A trucker caught video of a truck jackknifed on I-40 near Prewitt. Right on Central in downtown Albuquerque, an ART bus lost control and blocked lanes.

Then there was a complete standstill on I-25 Wednesday night, leaving hundreds of cars and trucks stuck in traffic. On other streets, cars were either pulled off to the side or stuck after losing control from the incredibly slick and icy roads.

Even the director of the city’s snow removal was stuck on the roads.

"Took me about three hours to get home, so it is treacherous out there this evening,” said Patrick Montoya, director for the city’s Department of Municipal Development. "I counted no less than 10 to 12 accidents just on my stretch home."

Montoya told KOB 4 that 36 city crews have been out all day salting and cindering the roads. He said that while they were prepared, so much snow coming down in a short amount of time made it like the treatment they did didn’t happen.

"At that point, it was just maintaining as best as we could. It was just overwhelming for everyone," Montoya said.

But even with all of this, the plan doesn’t change. Those 36 crews will remain on the roads, continuing to sand and scrape those icy and slick roads.

“We will continue that through the next 24 hours at least,” said Montoya.

City and state crews will be working to clear as fast as possible, but can only do so much in certain conditions.

"The state is gonna be working on our highways. There’s also some work on state roads like Coors and Tramway. And then the city will be working on major arteries. So as a reminder, we start with the major arteries first especially for our first responders, and then we work our way to smaller roads," said Mayor Tim Keller.

They ask for patience as crews work 12-hour shifts.

"We all have limits as far as what our crews can do and what the weather’s gonna throw at us,” said Montoya.

But another concern they have is keeping one of our most vulnerable populations safe.

At Coronado Park, dozens gathered to keep warm inside their tents, wearing all the clothes they have with them. Many were seen getting on the bus to be taken to the city’s Westside Shelter.

Officials told KOB 4 they have plenty of room there for anyone who wants to go.

"We are low barrier and what that means is people can take their pets and we provide the transportation to get there as well as the meals," said Carol Pierce, director of the city’s Family and Community Services Department.

There are also other shelters that are closer that people can go to. However, the city says they may be at capacity by this point.

New Mexico State Police responded to 54 weather-related crashes in the last 24 hours, including crashes with and without injuries. 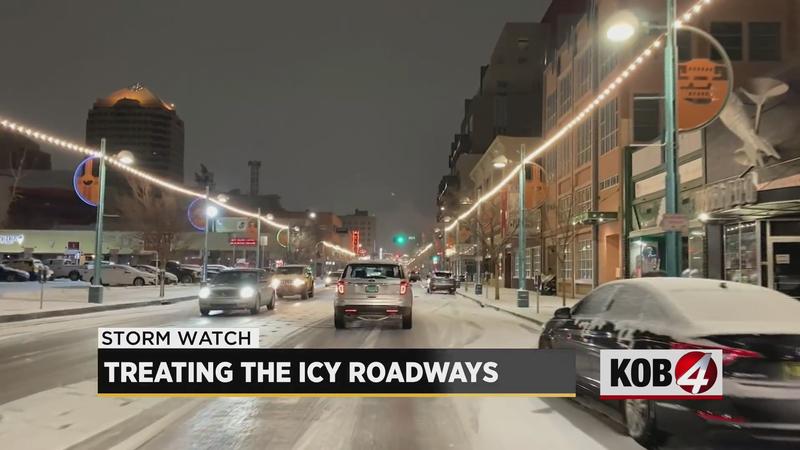