ALBUQUERQUE, N.M. – It was a deadly weekend for the motorcycle community. Two people died in two different motorcycle crashes last night and this morning.

Because gas prices are high, more people are choosing to drive their motorcycle than their car.

It’s prompting a call from the New Mexico Motorcycle Organization for people to slow down and watch out. A message to both vehicles and motorcyclists on the roads.

“It is not just another crash, it’s the loss of another loved one,“ said Raymond Gallegos, chairman of the New Mexico Motorcycle Rights Organization.

“These are family members, these are fathers, sons, brothers, daughters, that their life has been taken,” said Gallegos. “So it’s devastating families not just immediate family but to the community, to all of us.”

Every year it’s a problem. But Gallegos said this year that problem is worse. From the organization’s tally, the state has already surpassed the number of motorcycle fatalities from this time last year. According to their count, he said we’ve already lost 34 New Mexicans this year.

“Other motorists out there are not being as courteous as they used to, they’re not giving the same distance. There’s a lot of frustration on the road lately. We’ve seen an increase in road rage. I think it’s all contributing to that,” said Gallegos. “Being in lockdown for so long and then coming out of hibernation, I think it’s impacted everyone’s driving skills, from motorcycles to cars.”

But Gallegos said there is a big difference in the kind of damage even a fender bender could do to a motorcycle.

“The motorcycle is unforgiving. They may have safety equipment that they’re wearing and it will protect them to a point, but it’s really a lot different. You’re talking about a human body really not designed for impact,” said Gallegos.

There is another reminder, the NMMRO’s ghost bike — a tribute to all New Mexicans who have lost their lives on the road.

The New Mexico Motorcycle Rights Organization is hoping to create and display more of those ghost bikes to raise awareness. It will be on display at the state fair. 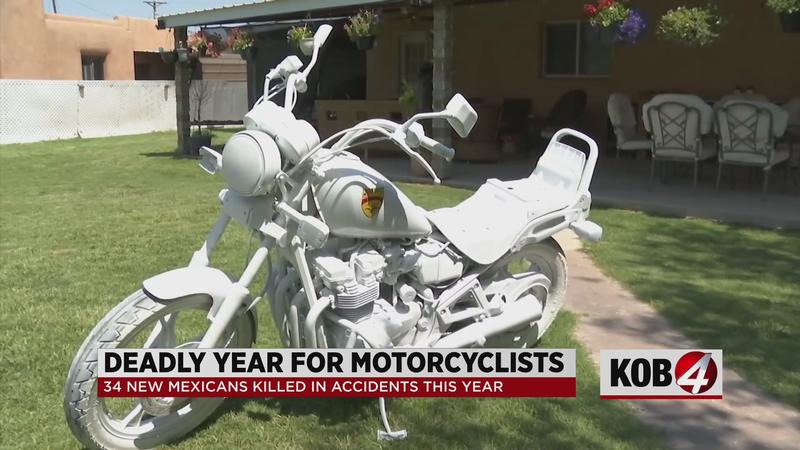