U. of the Southwest leaders discuss tragic crash, plans for memorial

HOBBS, N.M. — For the first time since the crash, University of the Southwest leaders held a news conference at the school’s library Thursday morning.

"Our institution is crushed and broken, but strong," said Paula Smith, the university’s vice president for Financial Services and CFO.

"I will say that communicating with the parents, the families over the last three days – they’re just amazing people, the families are amazing, they are resilient, they are supportive," Dr. Ryan Tipton, the university’s provost, said during the news conference. "They love USW and they know that we love them. Every day is another step towards recovering and rebuilding, that’s what we’re going through."

Tipton said the university’s president is at a Lubbock hospital with the two students who survived the horrific crash – 19-year-old Dayton Price and 20-year-old Hayden Underhill. 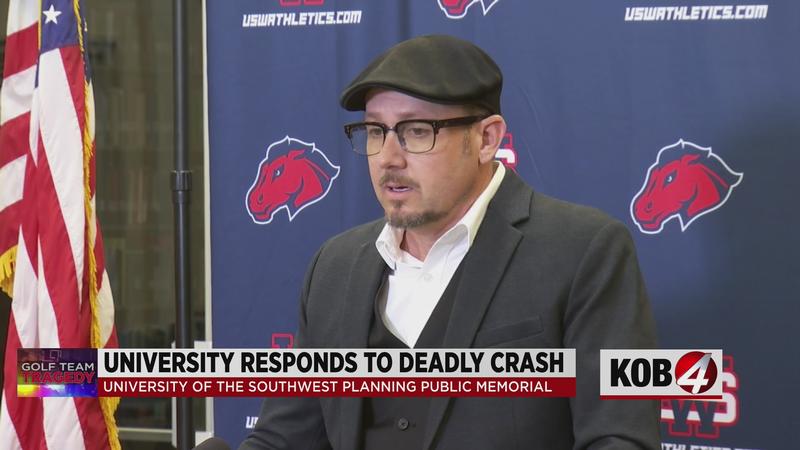 "I did speak with the president last night," Tipton said. "They are recovering, they’re making steady progress. One of the students is eating chicken soup, so spoke with the parents and they are there with them and they are recovering every day. It’s a game of inches and every hour leads to that one step closer to another day, which is one step closer to another week, month, year, etc. So there is no indication as to how long it’s going to take, but they are both stable and recovering, and every day making more and more progress – so we’re happy with that."

Tipton also thanked the community of Hobbs for coming together to support the university’s students and staff through their grief.

Grief counseling is available on campus for students – many will be returning this weekend from spring break. It’s a close-knit campus community with only about 350 students attending classes in person at the private Christian university.

Tipton said they will now begin the process of planning a memorial service with students to honor the lives of their friends and classmates.

"We will be working with them next week to coordinate an assembly or some sort to memorialize the students, but we want our on-campus students to be part of that," Tipton said.

University officials will announce details about the public memorial once they are finalized.