It was last October when cinematographer Halyna Hutchins was shot and killed and director Joel Souza was wounded on the set of “Rust.” The gun was in the hand of actor and producer Alec Baldwin.

Now, we’re seeing video from the set and the interviews afterward.

Actor Alec Baldwin and armorer Hannah Gutierrez-Reed both sat down with investigators for quite a while to share their sides of what happened. After their brief exchanges with law enforcement on the set, both of them sat down with investigators for more than an hour to explain the ins and outs of handling firearms on set, and who had access to what unexpectedly became a deadly weapon that day.

Gutierrez-Reed, the 24-year-old movie armorer, talks with investigators first – explaining her role on the set.

"I check the guns, load the gun, and hand it off to the actor," said Gutierrez-Reed.

It doesn’t take long for law enforcement to get into specifics about what type of ammo stays on set and where.

Deputy: "Is there live ammo that’s kept on set?"

Gutierrez-Reed explains the difference between live and dummy rounds before getting into the details of that tragic day.

"I ran out, Dave brought me the gun, and I opened the gun up, and one of the dummies somehow had been discharged," said Gutierrez-Reed.

She admits she was about 20 feet from where the shooting happened.

"We had that gun the whole time before that and nothing happened. And I wasn’t in there and they weren’t even supposed to be pulling the hammer back," said Gutierrez-Reed.

Something Baldwin will later admit he did on set that day.

He explains his perspective of the incident minutes after he sits down with investigators.

"I take the gun out slowly, I turn and cock the pistol, bang it goes off she hits the ground she goes down, he goes down screaming," Baldwin said.

Baldwin talks about Halyna Hutchins and Joel Souza’s positioning on the set that day – thinking it was just a rehearsal.

"They were standing in positions they wouldn’t normally be in because they assume it was an empty, cold gun," said Baldwin.

Investigators become pointed with their questions.

Deputy: "Do you think that any part of this incident that occurred was intentional?"

Baldwin: "I can only say this, which is to me, to place a bullet and position a bullet that is a live round – to make sure that that bullet is in the chamber if I were to squeeze the trigger in rehearsal that that bullet came out – someone has to have extraordinary access to that weaponry to do that."

This was only the beginning of countless questions and months of investigating how this could have happened.

Baldwin and Gutierrez-Reed were just two of several initial interviews that day. 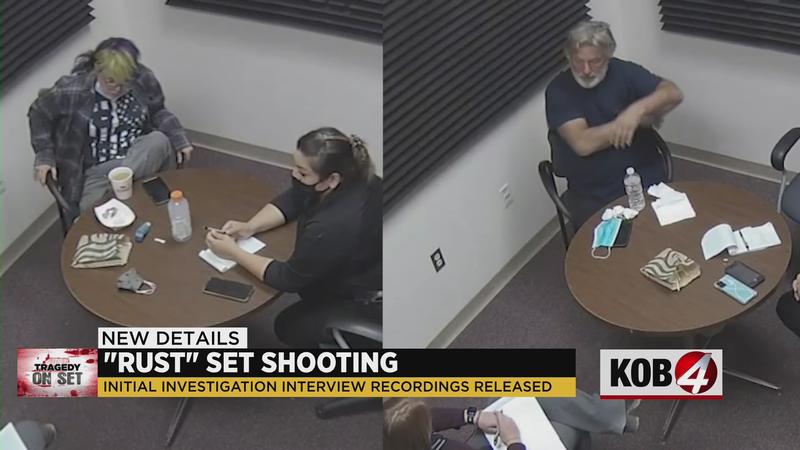