As the United States pressed to beat the Soviet Union to nuclear supremacy during the second half of the last century, miners in New Mexico hurriedly dug precious uranium out of the ground and sent it to nearby mills to refine the ore into “yellowcake” – one step closer to inclusion in a nuclear bomb.

While the U.S. achieved Cold War victory decades ago and has since covered or capped some 80 percent of leftover milling waste – called tailings – a monthslong investigation by ProPublica found that it’s a different story below ground, where uranium and other toxic elements left behind by the Cold War continue to pollute groundwater across the country.

That’s especially true in New Mexico, where companies that milled uranium at seven different sites left behind polluted groundwater. Rather than ensure the toxic mess is cleaned up, the investigation found that government regulators have issued exemptions to pollution rules in five cases, with the Homestake Mill’s owners recently asking for their own relaxed regulations and the Church Rock mill’s cleanup still the subject of heated debate.

A third of the nation’s milling and processing waste sits in New Mexico. What should be below the 94.52 million tons of toxic tailings is an impenetrable barrier to prevent pollution from seeping into the water table below.

When a uranium mill shuts down, here is what’s supposed to happen: The company demolishes the buildings, decontaminates the surrounding soil and water, and encases the waste to stop it from leaking cancer-causing pollution. The company then asks the Nuclear Regulatory Commission, the lead agency monitoring America’s radioactive infrastructure, to approve the handoff of the property and its associated liability to the Department of Energy’s Office of Legacy Management for monitoring and maintenance.

“There are New Mexicans who are paying a really steep price for those activities,” said Maggie Hart Stebbins, New Mexico’s Natural Resources Trustee. “Natural resource injury – so the groundwater contamination, for example – is affecting people now and it’s going to affect people into the future.”

It’s been decades since the last of the open mines closed and many New Mexicans are unaware of the waste. 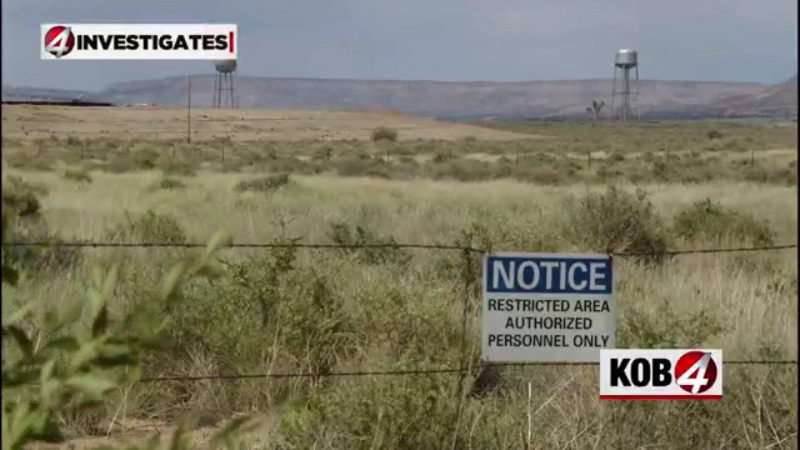 “I think it’s because you don’t see it or smell it or feel it,” said Albuquerque state Rep. Debbie Sariñana.

“It’s definitely fair to say that New Mexico has borne the brunt of the nuclear age in America. Between all the research, the mining, the milling and the waste that was inherently left behind, I don’t know if anyone holds a candle to New Mexico’s place in America’s dominance in the atomic age,” said ProPublica reporter Mark Olalde, who led the team that cataloged the nearly 300 million tons of waste left behind by the uranium industry – and for which the federal government was the largest and most important customer.

“We decided to kind of step in and do that cradle-to-grave type analysis to figure out what are we talking about in terms of groundwater contamination, where is this contamination, how much of it might there be a really who’s harmed by it,” Olalde said.

In New Mexico, most of the pollution piles are in the Grants Mineral Belt, a mining district that stretch from Grants, west toward Gallup. Native communities – especially the Navajo Nation – have been disproportionately impacted by uranium mining and milling.

Rep. Sariñana was among a group of lawmakers in 2022 who sponsored a bill to create two uranium cleanup coordinator positions in state government. The effort, now law, passed without a single dissenting vote among the state’s 112 lawmakers. She said cleanup seems to have happened in fits and starts in some cases, fell through the cracks.

“Over the years, I think that’s what’s happened. You know, when people came and mined – they came because the federal government asked them to – they came, they mined and they left. And we didn’t have any regulations that said, you know, ‘You have to clean up your mess’,” she told 4 Investigates.

Hart Stebbins, whose job it is to seek compensation from responsible parties after an environmental accident, said it makes sense to have people working for the state whose job it is to make sure uranium cleanup continues regardless of who’s in the White House or the governor’s mansion in Santa Fe.

ProPublica found regulators at other sites across the country are just as quick to issue exemptions there as they have been in New Mexico.

“It’s a huge problem,” Hart Stebbins explained. “Our charge is to return to the sites to pre-contamination condition. And so when a company or an owner can get the alternate concentration limits, that doesn’t really fit with what we are charged to do.”

The creation of the coordinator positions is a nod to the face that the cleanup for the Cold War-era mess will likely outlast the war itself – a war in which New Mexico’s nuclear heritage continues to loom large.