ALBUQUERQUE, N.M. – Albuquerque police said it is investigating an alarming number of burglaries and vandalism cases at boutique-style businesses like hair and nails salons, and most recently, tattoo parlors.

At least ten local tattoo shops have been targeted in recent weeks.

“This is our livelihood. This is like– we have families, we have people to feed,” said Tyson Gonzales, the owner of Cellar Door Collective.

Another tattoo shop owner, who wishes to remain anonymous, told KOB 4 he has been targeted multiple times since mid-February. 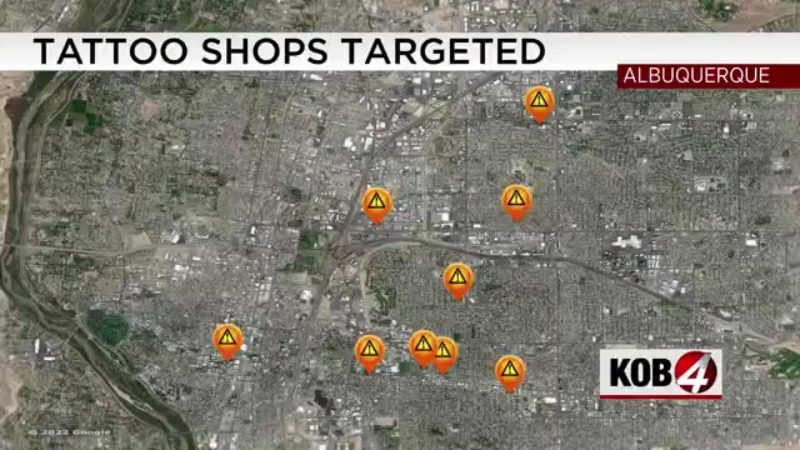 He said his windows were smashed for a third time a month later, then his shop was vandalized with spray paint, and on Tuesday, he started receiving harassing messages online.

“Just vulgar to say the least,” he said. “I just have no idea what to do or say about it.”

Gonzales said he is out several thousands of dollars, after his businesses was burglarized over the weekend.

Multiple shop owners said it has been difficult to get a response from police on their investigation into these incidents.

“The officers themselves have been amazing,” one owner said. “They’re always really friendly and they’re supportive. But their hands are just tied, they’re short-staffed and I understand that. There is just nothing that they can do.”

Gonzales described the process as “disheartening.”

“We’re put on the back burner for so long,” he explained. “You call them five to six, seven times, and still, you know, waiting for that officer to at least roll by.”

Fellow shop owner Stephanie Malan echoed their frustration after Relic Tattoo Co. was burglarized last October, then for a second time in May.

“I’m hoping that there can be some kind of resolution, because as it stands if we continue to experience this, you know, we’re not going to be able to remain open,” she said. “It’s just too high of a cost. So something needs to, something needs to happen.”

Some shop owners have taken to social media, posting their own photos and surveillance footage of these incidents, hoping to gather more information. Others said they are considering hiring a private investigator.

Cellar Door set up a GoFundMe page here, to help with their recovery.

APD is asking for the public’s help in finding or identifying the suspects and vehicles below, which they believe are connected to multiple burglaries in Albuquerque. If you have any information, they ask that you call 242-COPS or Crime Stoppers at 843-STOP.