On Tuesday, police tracked down a vehicle of interest in the murders of four Muslim men and detained Syed, the driver.

Officials say they connected Syed to the homicides using bullet casings found at the scenes. They say the gun used in the shootings was discovered during the overnight search of his home.

Detectives said the offender knew the victims to some extent and an interpersonal conflict may have led to the shootings. 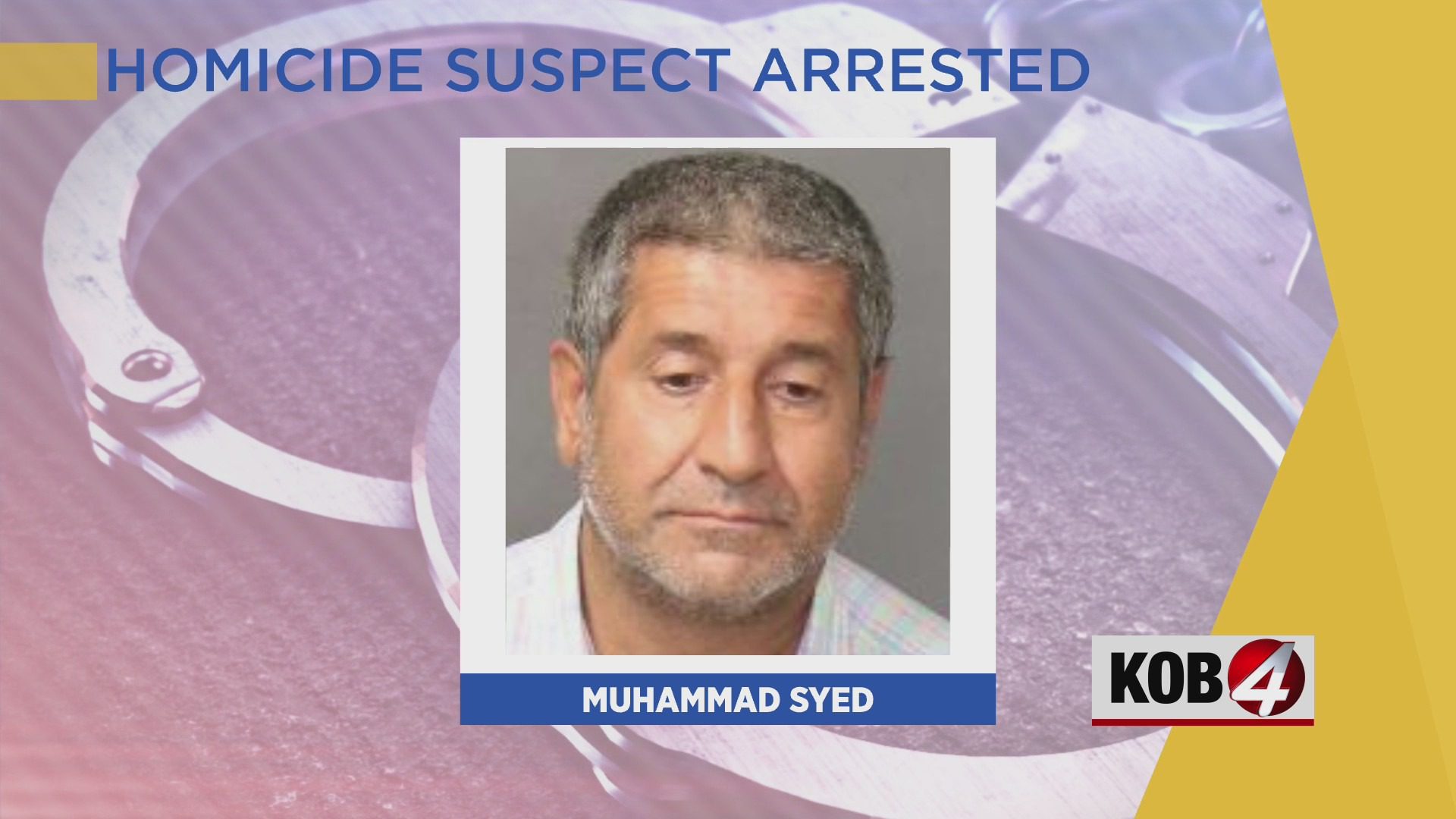 According to APD, officers were preparing to search Syed’s home in southeast Albuquerque Monday when Syed drove from the residence in the vehicle of interest — a Volkswagen Jetta. Police followed Syed to Santa Rosa, where he was reportedly detained. Authorities then searched his home and the vehicle. Multiple firearms were reportedly recovered.

At this point, Syed is still the top suspect in the murders of two other Muslim men in Albuquerque.

“This has been a tough week for our community,” said APD Chief Harold Medina. ” But we all pitched in to solve these crimes and protect a community that felt like it was under attack. We came together, like we always do in Albuquerque.”

Police said they are still investigating a motive, and Syed’s relationship with the victims. According to APD, Syed is originally from Afghanistan and has been living in Albuquerque for multiple years.

CAIR, the Council on American Islamic Relations, issued a statement in response to the arrest:

“We welcome the arrest of a suspect in this horrific shooting spree and we commend law enforcement for their efforts at the local, state and federal levels. We hope the news that this violence has been brought to an end will provide the New Mexico Muslim community some sense of relief and security.

Although we are waiting to learn more about these crimes, we are disturbed by early indications that the alleged killer may have been targeting particular members of the Shia community. If this is true, it is completely unacceptable, and we encourage law enforcement to file any appropriate hate crime charges against the suspect.

Acts of hateful, sectarian violence against followers of the Shia tradition and any other group have no place in our communities, our country or anywhere else. American Muslims are and must be united against all forms of hateful bigotry, including anti-Shia bias.”

I’m relieved that a primary suspect in the killings of Muslim men in Albuquerque is in custody.

My deepest gratitude goes out to the law enforcement officers involved for their tireless work, and my heart goes out to the victims, their loved ones, and all those in the community.

Four Muslim men have been killed over the last nine months in homicides investigated by Albuquerque police:

ShotSpotter data from the Albuquerque Police Department shows at least 13 rounds fired in the area of 417 Rhode Island St. NE around 10:02 p.m.

Officers arrived around 10:07 p.m. and found Aftab Hussein with multiple gunshot wounds, lying next to a silver Hyundai sedan at 420 Rhode Island St. NE. He was pronounced dead, prompting a homicide investigation.

According to the criminal complaint, police found 7.62×39mm casings from an AK-47 at the scene. The suspect reportedly hid behind a bush near where Hussein would park his car. Then, through the bushes, the suspect shot Hussein multiple times as he exited his car.

At 9:17 p.m., Albuquerque police first received a 911 call from a person saying multiple shots were fired from a vehicle in the area of 420 Cornell Dr. SE. The caller said the vehicle sped away right after the shooting.

Officers were dispatched to the scene at 9:19 p.m. and arrived at 9:27 p.m. During those eight minutes, ShotSpotter detected several gunshots fired in the area of 422 Cornell Dr. SE – and APD received 911 calls from multiple people who said a person appeared to be shot.

Officers arrived and found a man, later identified as Muhammud Afzaal Hussain, with multiple gunshot wounds. He was pronounced dead at the scene.

During the investigation, they found seven 9mm casings and seven 7.62×39mm AK-47 casings in the area.

Aug. 2: A day after Muhammud Afzaal Hussain was fatally shot, his family told police that he routinely took walks in the area around 9 to 10 p.m.

Police also interviewed a witness who said a dark silver or gray, four-door sedan pulled up in front of 422 Cornell Dr. SE. and started firing shots, before fleeing the area.

Aug. 3: The Bureau of Alcohol, Tobacco, Firearms and Explosives national ballistics information network generated a lead: A thorough review identified the casings from the July 26 and Aug. 1 homicides as being from the same firearm.

Aug. 8: APD and the FBI received tips from people alleging Muhammad Syed was the shooter in the suspected homicides of Muslim men in Albuquerque. The tipsters also said he was driving a gray Volkswagen sedan.

Detectives linked Syed to an Albuquerque residence. Multiple detectives positively identified Syed at this residence and photographed a gray Volkswagen sedan there, with its hubcaps removed.

Later that day, an ATF agent informed police of a 9mm pistol, an AK-47 pistol, an AK-47 rifle and accessories for the guns that Syed and his son purchased at various gun shops throughout the city.

Video surveillance footage at a southeast Albuquerque gunsmithing business, from the day Afzaal was killed, showed Syed and his son exiting a gray Volkswagen sedan and walking into the business so Syed could purchase a scope for his AK-47 rifle. The pictured vehicle matched the vehicle photographed by detectives and a vehicle seen on video surveillance footage at 230 Truman St. SE — where Naeem Hussain was killed on Aug. 6.

Aug. 8-9: An APD detective saw that Syed left his residence and began driving east on I-40 in a gray Volkswagen Jetta with the hubcaps removed. Detectives eventually detained him in Santa Rosa overnight.

Aug. 9: A search warrant was executed at Syed’s residence. An AK-47 rifle was found in Syed’s bedroom, in addition to an AK-47 pistol and a rifle scope found elsewhere in the residence. The firearms were collected and test-fired, with the casings sent to ATF for a general comparison.

Syed’s son was taken in for questioning by APD. He confirmed the vehicle as a gray Volkswagen Jetta belonging to Muhammad Syed. The son also confirmed their residence and the firearm purchases police learned of, stating he was with his dad for those purchases.

The son also told police he and his brother were not allowed to touch his dad’s firearms and that his dad also had a 9mm handgun. Although the son knew about the shooting, he said he didn’t shoot the victims.

A detective with APD’s Major Crime Scenes Team executed a search warrant of Syed’s 2017 Volkswagen Jetta after the interview. The MCST detective located a 9mm casing, two 7.62X39 casings and a 9mm handgun in the vehicle. They were submitted to ATF for comparison. Investigators later found Syed’s AK-47 rifle fired the casings located at the July 26 and Aug. 1 homicides.

In an interview with police around 9:05 a.m., Syed told them he was driving his 2017 Volkswagen Jetta to start a new life in Houston, pointing to the shooting of Muslims in Albuquerque as reason for them to believe the situation was getting bad. He told police he owned several firearms and that no one else used them. He also denied any involvement in the murders.