Bernalillo County Sheriff Manny Gonzales and Fire Chief Greg Perez spoke about the loss they’re now having to deal with. Both say their first priority is to take care of the families that are now left without fathers, husbands, and sons.

Gonzales said the heroes left this world serving our community.

“First and foremost, the thing we want to actually acknowledges is the four people that are deceased, they are bar none heroes to us. Far before this incident, they were doing this type of work whether it be rescues whether it be firefighting or police work. All these people were dedicated, we understood that they loved what they did, to the point where I find some comfort in knowing that, that they lost their lives doing what they loved,” said Gonzales. 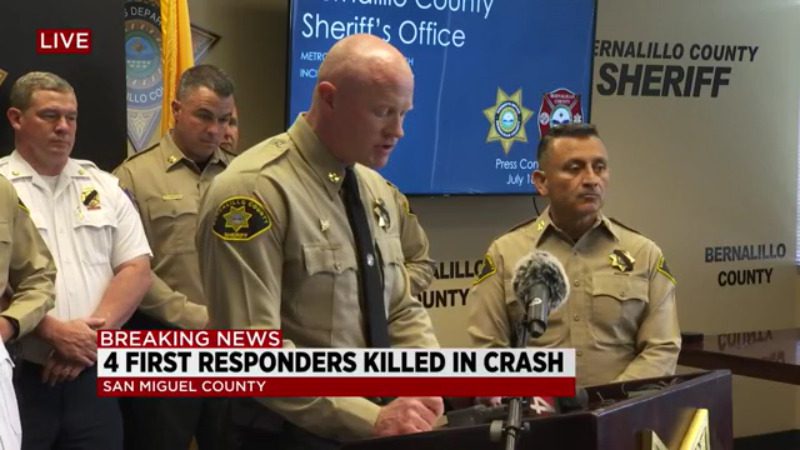 Bernalillo County Fire Chief Greg Perez says this kind of loss is unprecedented for the fire department and sheriff’s office.

Gonzales says the crash has had a major impact on his department and he’s grateful for the support from other agencies in the state.

According to BCSO, two state police officers were first to the crash, doing what they could for their fellow first responders – but sadly it was too late.

The big question on everyone’s minds is what caused the crash?

The National Transportation Safety Board is investigating, but so far they haven’t said much.

A spokesperson told KOB 4 Monday that the helicopter hit the ground upright at a high rate of speed and rolled over.

We could see a preliminary report in the best weeks – but a full report from the NTSB could take up to two years.  In the meantime, NTSB representatives are hoping witnesses will contact them at witness@ntsb.gov.

A GoFundMe page has been organized for the four victims.

To watch the full news conference, click on the video above.

2:50 p.m. Arrive on scene for East Mesa Fire/set up bucket for bucket drops

3:05 p.m. Launch from initial scene and performed approximately 20 bucket drops before next landing

6:36 p.m. Depart Las Vegas to return back to Double Eagle

I’ll have a 🧵here of information from the news conference. Officials will not be taking questions from media.

Asks media to bear with him because it is extremely difficult. Sheriff choking up as he tries to speak.