ALBUQUERQUE, N.M. – It has been four days since four Bernalillo County first responders died in a helicopter crash near Las Vegas. The county sheriff’s office and fire department say they are standing by the families of the crash victims during this difficult time, and promising their unwavering support.

Officials are asking for the public’s help in providing comfort and security.

“There are expenses related to a person’s death, funeral expenses, some of those immediate things that those families need our assistance and covering, but you’re also talking about a generational loss of a person who will no longer be there, some of those individuals may have been the sole breadwinner for their family, and they’re now gone,” said BCSO Special Operations Commander, Captain Nicholas Huffmyer.

That is why the Bernalillo County Deputy Sheriff Association organized an online fundraiser for the victim’s families, with a $400,000 goal.

“The funds that go to that are going to be split directly four ways between all of the families that survived, surviving families of the members,” said Lt. Robert Arguelles with the Bernalillo County Fire Department. 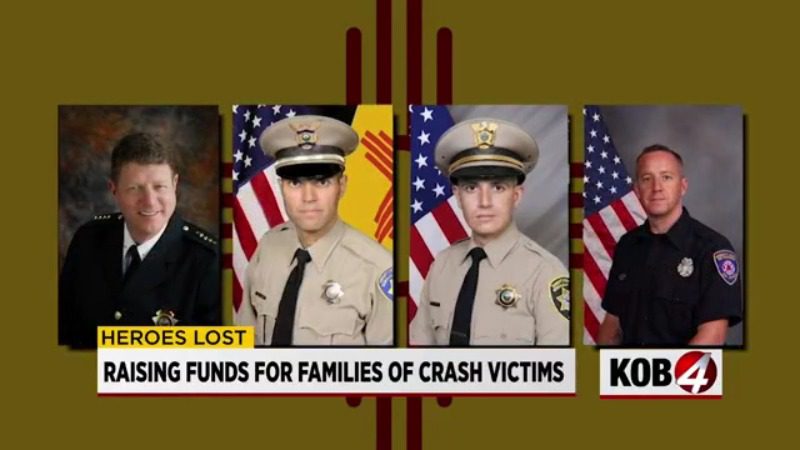 100% of those funds will go directly to the families.

KOB 4 is partnering with the Ten-82 Foundation to take additional donations by phone Friday, July 22.

“This allows the opportunity for individuals, that maybe don’t feel as comfortable going online or giving through something like a GoFundMe account, they can call in and be able to talk directly with an organization,” Arguelles said.

Bernalillo County officials also said there are other ways to show support for the families and the agencies their loved ones served.

“If you see a first responder out there on the street today, fireman, EMT, law enforcement professional, just say, ‘hi’ to them,” Huffmyer said. “Just shake their hand and say, ‘hello,’ and acknowledge the difficulty of the time period. It’s not money, but I would argue that sometimes that kind of acknowledgment and face-to-face interaction with the public in a positive way, is more valuable.”

Click here to donate to the Metro 2 Family Relief Fund through GoFundMe.

For those who prefer to make a donation over the phone, the Ten-82 Foundation will start taking calls live Friday on KOB 4, between 5 p.m. and 7 p.m.. The phone number to call will also be provided at that time.