No UNM basketball players were involved in the shooting, but it did affect them as a program. Both NMSU and UNM men’s basketball teams will not be meeting up on the hardwood at all this year.

UNM and NMSU came to an agreement to not make up the anticipated game and to cancel their Dec. 3 meetup.

Pitino spoke on his first reaction to it all.

“Shock! You know, and the first thing you do as a coach you’ve tried to figure out your program,” said Pitino. “So we checked on our guys right away to make sure they’re good. You know, we want to reload the village and make sure everybody’s good.” 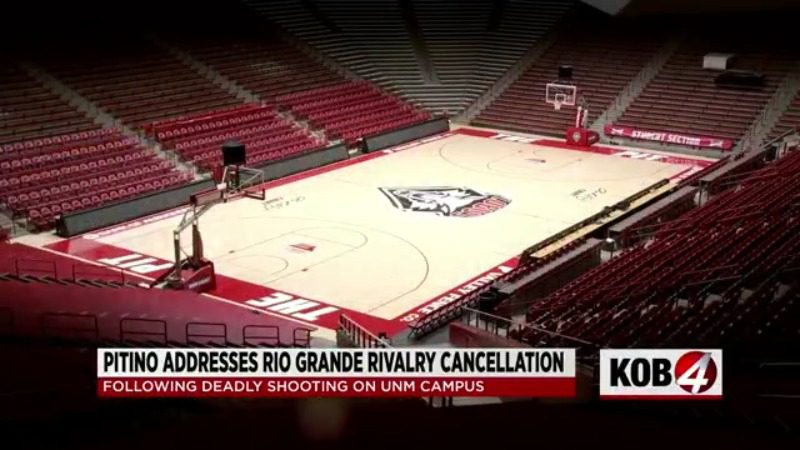 The Rio Grande Rivalry is anticipated every year and for the schools to halt the season comes with some losses for the athletic department – losing anywhere from $400,000 to $500,000 just from that game.

Throughout this situation that contains so many layers, Pitino stressed multiple times accountability and transparency.

“That transparency piece and that accountability piece is the most important thing when you’re dealing with a crisis of some sort,” Pitino said. “When something like this happens, we got to get to the bottom of why it happened, and could somebody have handled it differently? And we got to hold people accountable.”

Without the rival game on the schedule for the Lobos this year, another anticipated game is against coach Pitino’s father – Rick Pitino – head coach of Iona.

While the NMSU game will take a hit on ticket sales, concessions, and 15,000 screaming fans, Pitino hopes it’s not just one or two games that can produce some sellout crowds this year.

“With all humility, we want to build this program to where it’s not just one game that’s selling out. We feel like we are a program that is on the rise, we feel like we’re a program who has captured the Albuquerque community and that showed by the ticket sales,” Pitino said.

The Lobos are still undefeated right now and are hoping to get some crowds back in the building this weekend for their big holiday tournament – the Lobo classic.