Union sets goal of $400K for families of fallen heroes

With more than $30,000 raised already, the sheriff’s deputies union is confident it can be done – especially with the outpouring of community support they’ve seen so far.

“I am taken aback by the amount of community members that have apologized for our loss, as if they know somebody close in my family has died,” said Ryan Zamora, president of the Bernalillo County Deputy Sheriff’s Association.

Secretary Matthew Rael and Zamora never imagined they’d be grieving over such a big loss. 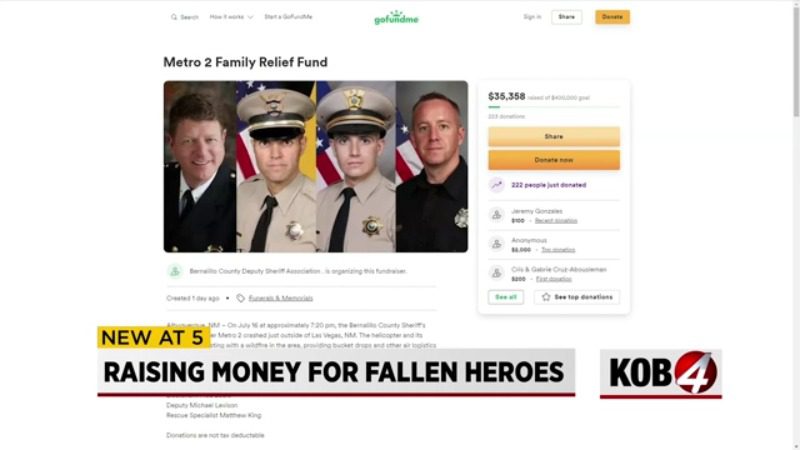 The cause of the crash is still unknown.

“The GoFundMe page will be active for some time. Until we reach the goal or if it’s just something we need to put in place for a few weeks to gain as much support as we can for the famlies,” said Lt. Matthew Rael with the Bernalillo County Deputy Sheriff’s Association.

Rael said he knew all of the four crash victims, and that he and Undersheriff Koren went back years.

“I spent approximately six months in the air unit earlier on in my career as a supervisor working with then-deputy Larry Koren,” said Rael.

The horrific crash serves as a reminder that first responders do a variety of tasks to keep the public safe.

“Something that we see pretty often I think as both firefighters and law enforcement, that is death. But one thing that we don’t see often is the death of somebody that we’re super close to,” said Zamora.

The Metro 2 family relief fund has raised over $30,000 since it was launched Monday.