Balloon safety advocate says Albuquerque crash could have been avoided

ALBUQUERQUE, N.M. – New Mexico lost five souls in June when a hot air balloon crashed into a power line. A toxicology report shows that the pilot had cocaine and marijuana in his system at the time of the crash.

"It makes me both sad and furious,” said David Tanzer, a longtime pilot and hot air balloon safety advocate.

"I don’t want to see the sport go away, and I think the sport is in danger right now for many reasons,” Tanzer said.

Tanzer lives in Vermont but has flown in for New Mexico’s Balloon Fiesta. After learning of New Mexico’s deadliest hot air balloon crash, he made a record request from the Federal Aviation Administration for pilot Nicholas Meleski’s toxicology report.

The report shows Meleski had cocaine and marijuana in his system.

While the National Transportation Safety Board has not yet said if the drugs contributed to the crash, Tanzer said he’s seen this before.

"And determined the probable cause of that, the Lockhart accident, which was the pilot’s judgment was severely impaired due to drug use,” he said.

In Lockhart, Texas in 2016, 16 people died in the deadliest hot air balloon crash in American history.

"Here we have another essentially the same situation of a pilot who was substantially and significantly using drugs while flying a balloon and killed, in this case, four innocent people,” said Tanzer.

Tanzer said that prompted calls for two things, the first: medical checks for ballooning pilots. They are required for airplanes and helicopters, but not balloonists.

Meleski had a medical certificate that said he was healthy enough to fly by FAA standards. His last check was in July 2020.

But the second is a letter of authorization — which is a set of rules for commercial operators to abide by under the FAA weather guidelines and more rules for pilots.

"They are required to have a mandatory drug testing program for their operation staff, including their pilots,” Tanzer said.

He said the FAA should have put more regulations in-place after the Texas crash – and now calls for tougher rules will return.

Mary and Martin Martinez were two of the victims in the crash. Mary’s brother, Manny, sent KOB 4 this response:

"My family is heartbroken over the news that the pilot of the balloon, Nicholas Meleski, had drugs in his system while operating the balloon that took the lives of my sister Mary Martinez, her husband Marty Martinez, John and Susan Montoya and himself. When taking a balloon ride as my sister Mary did, she entrusted her life with this pilot. Nicholas Meleski obviously didn’t take into consideration all of the people whose lives he destroyed due to his drug use. We are aware that the drugs in his system may not be the cause of the crash but having Cocaine and Marijuana in his system, may have been one of the contributing factors.

Had there been a way for the deceased to make an informed decision about the pilot, perhaps they would be here today. We hope that in the future, the NTSB and FAA, regulate Balloon pilots in the same manner as they do airline pilots." 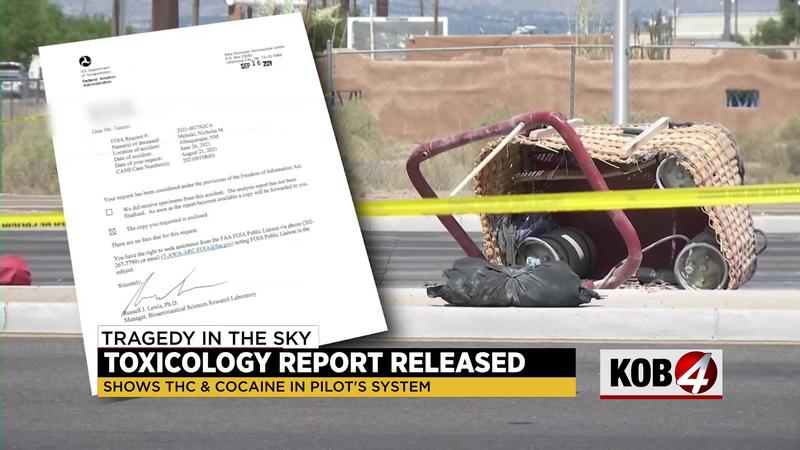