According to a criminal complaint obtained by KOB 4, James Ramirez was identified at the scene as the suspected shooter. The handgun used in the shooting was found next to Ramirez in the parking lot. 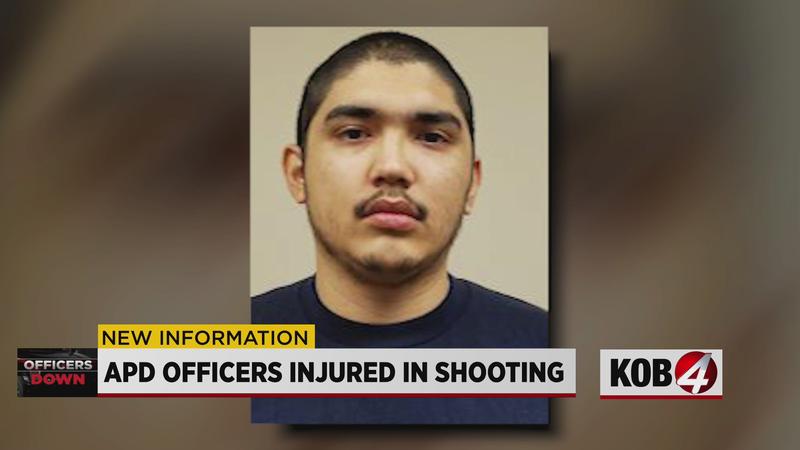 At 7 a.m. Thursday, police were responding to a call about an armed robbery that occurred south of Western Skies and Central Ave. SE in Albuquerque. The criminal complaint stated that the suspected shooter was one of two suspects that the victim described.

At 8:38 a.m., the victim identified the two suspects walking northbound along Copper Avenue NE and Juan Tabo Blvd NE by the Maverick gas station. The victim called 911 after noticing that one of the suspects was carrying their backpack and that the other suspect was carrying a handgun.

At around 9:16 a.m., the victim met APD officers in the area of Summer Avenue and Juan Tabo Blvd. NE and positively identified the suspects as walking west on Summer.

Officer Verbeck and Officer Eichel followed the suspects on foot as the suspects turned south down an alley between Juan Tabo and Muriel St. NE. In the alley, the suspected shooter then shot Eichel on his left forearm and shot Verbeck in the neck and on his arm.

Sergeant Kenny and Officer Gunderson observed the suspected shooter in an area near Federico’s Mexican Food and Dutch Bros., south of where Verbeck and Eichel were. The officers exchanged gunfire before Ramirez was struck by projectiles.

Kenny was shot in the bulletproof vest and Gunderson was struck in the face with glass and fragments as he took cover behind his marked police car.

The second suspect was not identified or apprehended by APD but was described as a shorter, skinny individual wearing black pants and a black sweatshirt over a white T-shirt at the scene. The complaint stated that he ran southbound down the alley. He was also observed as unarmed and was not witnessed as shooting at the officers.

A wallet was found in the suspected shooter’s pocket at the hospital that belonged to the robbery victim. The victim’s ID and credit card were in the wallet.

APD released pictures of a person they are looking for who they identified as possibly being connected to the shooting. The person is described as a male wearing all black with a gray Puma backpack.

APD is looking for the person in these photos, possibly connected to yesterday’s shooting that injured 4 officers. Described as wearing all black w/gray Puma backpack. If you have any information call @CrimeStoppersNM or 242-COPS. pic.twitter.com/qwaw2ZPFEJ

APD has also set up a portal seeking the public’s help in gathering evidence and information in the case.

A rollover occurred around 2 p.m. Thursday that was possibly linked to the shooting: