SANTA FE, N.M. — One woman was able to walk away with minor injuries following the I-25 crash that killed a Santa Fe officer and a retired Las Vegas firefighter. She saw everything unfold.

Alexis Jenkins said she was on the highway when she saw a white car and multiple police cruisers all heading straight for her – going the wrong way on I-25.

Jenkins believes the man who died, retired Las Vegas firefighter Frank Lovato, may have saved her life. Jenkins said she only had a matter of seconds to react.

“They’re coming full speed and we are, the oncoming traffic, is scrambling because the three police cars I saw were across the entire highway,” said Jenkins. “So there was no way for any of us to bail out.”

Jenkins said they were all panicking. She noticed the driver beside her – a man in a blue truck.

“I could tell the driver was panicking,” she said. “Didn’t know what to do. Kind of looked like he was playing chicken with the cop cars and the white car. So he’s just kind of shaking his driver wheel, not sure which way to go.”

“The next thing I knew I was getting hit, basically head on, and I knew it was a police vehicle because I just heard the sirens,” said Jenkins.

Jenkins believes the suspect’s vehicle went right on by, but she didn’t get a good look at who was inside. She said in the chaos of it all, she realized the man in the truck wasn’t responding. Later, she was told two people had died.

“It can happen so fast, and life is so precious,” said Jenkins.

The crash is giving her a new appreciation for life and the opportunity for her to send more time with her three young children.

“When they came in this morning cuddling with them was just the most special thing I could have experienced because I was there with them,” she said.

She believes the man in the truck saved her life by hitting her.

“Maybe that retired firefighter, his last action may have been to save one last life. Thank you to him and to his family. I’m so sorry,” she said.
Jenkins was on her way back to Colorado Springs, where she lives. She was taken to the hospital for bruises, a seat belt burn, and a fracture in her arm. 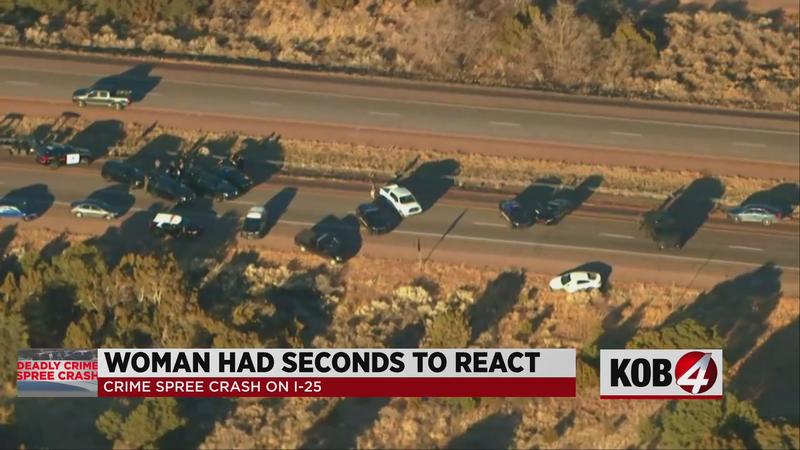